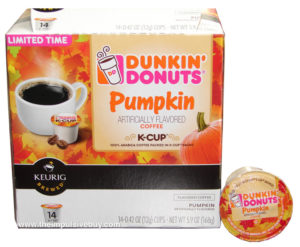 When one thinks of shareholder activism, the image of Carl Icahn and his ability to take over companies with his billions of dollars comes to mind.  But on the other end of the spectrum is the concept of shareholder advocacy, where small shareholders of publicly traded companies ask firms to make some changes when it comes to their social or environmental footprint.  Dale Wannen of Sustainvest Asset Management, a small shareholder in Dunkin Donuts, has called for the company to review its use of K-Cups and its negative impact on the environment. He has successfully raised the issue with Dunkin Donuts and it will be included for review in Dunkin Donuts’ proxy statement and upcoming shareholder meeting held on Wednesday, May 10, 2017, at 10:00 a.m. EST in Boston.

As a shareholder of Dunkin Brands (DNKN), Wannen introduced a proposal asking the multi-billion dollar donut-making machine to issue a report assessing the environmental impacts of continuing to use K-Cup Pods brand packaging. It was announced in July 2016 that more than 300 million Dunkin’ K-Cup pods were sold in the first year since being made available at retail outlets nationwide.  Dunkin’ Donuts is an American global donut company and coffeehouse chain based in in greater Boston with over 11,000 stores worldwide with annual revenues in excess of $10 billion.  Dunkin has a partnership with Keurig Green Mountain (GMCR) to manufacture the pods on behalf of the donut-maker.  According to reports, this partnership creates a 50/50 split on revenues generated from the sale of the K-Cup pods.

“We have a right to ask them what their long-term thought process is in terms of using these wasteful K-Cups,” stated Wannen.  “This isn’t us against them.  As a shareholder, I am simply asking the company to generate a report of the environmental effects of their production of hundreds of millions, if not billions, of these plastic cups. Dunkin Donuts is making a large sum of money to sell these, so issuing a report to showcase transparency and corporate responsibility is the least it can do. If anything it may be a golden opportunity to reassess alternative options.”

Wannen isn’t the only one on the anti-K-Cup train.  “Kill the K-Cup”, an ad campaign against the product, stated there were enough K-Cups discarded in 2014 to circle the earth more than 10 times.  Officials in the city of Hamburg, the second-largest city in Germany are now banning the use of K-Cups from all government buildings due to, “causing unnecessary resource consumption and waste generation and often contain polluting aluminum.”

In addition to the adverse environmental effects, coffee pods have been found to not be as sound of a business investment as once expected.  Recent financial data shows that Americans have decreased the amount of K-Cup’s usage. Manufacturers of these cups, Keurig Green Mountain Inc. and JM Smucker, saw a decrease in pod sales during the fourth quarter of 2015, which could suggest future decline in sales.

Founded in 1950, Dunkin’ Donuts is America’s favorite all-day, everyday stop for coffee and baked goods. Dunkin’ Donuts is a market leader in the hot regular/decaf/flavored coffee, iced coffee, donut, bagel and muffin categories. Dunkin’ Donuts has earned the No. 1 ranking for customer loyalty in the coffee category by Brand Keys for 11 years running. The company has more than 12,200 restaurants in 45 countries worldwide. Based in Canton, Mass., Dunkin’ Donuts is part of the Dunkin’ Brands Group, Inc. (DNKN) family of companies. For more information, visit www.DunkinDonuts.com.

Founded in 2013, Sustainvest is a fee-only registered investment advisor based in Petaluma, California which focuses on sustainable and responsible (SRI) investing that aligns client values with goals. Clients include individuals, non-profits, family foundations and trusts.  For more information, visit www.sustainvest.com.